Is it christmas? Glass has arrived! 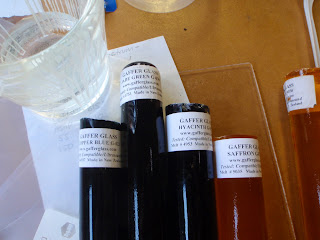 Posted by Spikeabell at 11:00 AM No comments:

This mornings demo was making a vessel suitable for a simple cameo. Only some of the colour had arrived on time to be put in a hot box so only 2 were made. 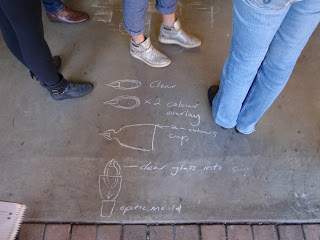 We were also given a list of required assessment pieces, hmm busy busy.
Posted by Spikeabell at 9:00 AM No comments:

We visited the Art Gallery of NSW, along with a group from COFA, and numerous, noisy brightly coloured children. Art & Soul was the exhibition and we were toured along by one of the galleries educators.

After helping Mikyoung glue the metal pieces to her works (I held things and kneaded bluetack) I shaped an archetype block. A print will go on the open face with the slight suggestion of the 3D foresty design at the back...its probably over sized...but 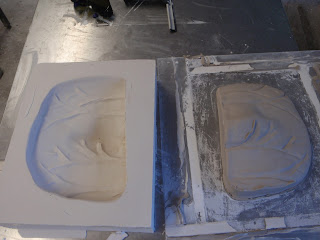 Posted by Spikeabell at 12:00 PM No comments:

Think that Gothic is just a penchant for too much black, lace and laces? Not so...The word Gothic has a long history which traveled a long way before it became what we recognise it as today. Gothic describes the uncanny, the uncomfortable and all that is 'unhomely'.

'Neo Goth: back in black' 2008.
goth/ emo/ surf/ indie/ punk: something decidedly dark is permeating all aspects of contemporary culture. From its subcultural origins in eighteenth century literature, through to the movement's dedicated tribes of black-clad youths in the 1980s, Goth culture is no longer underground or fringe, but mainstream. Is this 'new' interpretation of the Gothic aesthetic just that – an aesthetic – or is the neo-Goth impulse a considered response to a darker, more pessimistic world?
The major exhibition neo goth dips beneath the surface and takes a peek at the noir underbelly of Australian culture as it is manifested across art, fashion, film and literature. exhibition blurb

A trip to Marrickville resulted in more than seeing the 'peapod' in situ at ESP Gallery. I haven't been to visit..as I managed to miss the opening and tomorrow is the last day..for some reason I wanted to go in on a day when I wasn't picking up or dropping off the work. 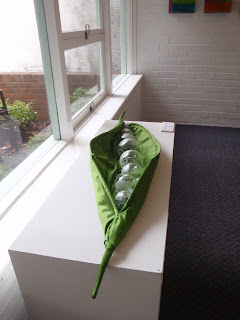 "As like two peas" was in the front room near the window..great position! And talking to some of the people who had been around over the last few weekends..people had been doing as the sign suggested..opening and closing it! Yay. Before we could start having a look around, Leanne and Naomi Shedlezkico co authors of the 'matchboxprojects' approached us to add a match box. I think I probably coerced Dougie into doing one but its a fun idea. Leanne and Naomi give you a matchbox, add your details to it and take a photograph of you and match box. You take it away and put in something that gives an impression of what you makes your city..your city...the small pic below is a Melbourne collection, all displayed inside a perspex brief case.

There was a lot I liked in the exhibition. I took pics of the pea pod. In procrastination of grocery shopping which Dougie pronounced 'Boooring' we mooched around Marrickville. I bought some fabric that Katie-Ann would love and we stopped by a cafe for coffee and cake..then we went grocery shopping.
Posted by Spikeabell at 3:00 PM No comments:

Email ThisBlogThis!Share to TwitterShare to FacebookShare to Pinterest
Labels: exhibitions

Once a week I go to work in an office. It's totally different from the rest of the week which is uni based, practical and art driven. I was talking to my boss, who is a contemporary jeweler, about the participation idea...and she got it right away and then gave me two examples in her field. 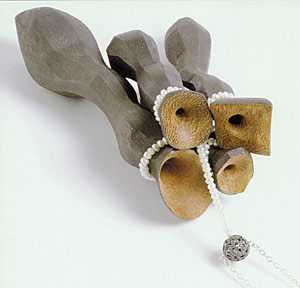 and Areta Wilkinson including an interesting essay at art jewelery forum from craft unbound. 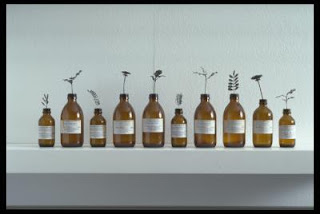 All were really interesting and added to my sudden relief that there is a whole community out there creatively and successfully pulling off an idea that I'm only beginning to explore. Yay!
Posted by Spikeabell at 2:00 PM No comments:

So today was the big day, our 3rd year proposal presentations. Here is my powerpoint presentation...the smaller italic text is a short version of what I was talking about...however when I came to show this none of the images came out!!! So I had to do a lot of describing. Jane Gavan gave me a good pointer to Nina Simon's book that is published online the http://www.participatorymuseum.org..and then I linked to her blog
Jane also suggested an idea which I will most likely use. When someone has finished rearranging the archetype blocks, they take a picture with their phone and SMS it to me..good idea. I like it because it's private but I still get to see all the versions and there is choice! Unlike if it was hooked up to a camera or projector.  I don't think the presentation loaded..i'll try again later.

The afternoon part of our glass major is concept based. In week one we went through the course particulars and then one by one (at random) gave a brief account of our summer break and outlined our idea/s for our project. Class interjections on artists and ideas and themes proves an interest in each others ideas.. Should be a good year!

Though ...I have SO much work to do..full studio presentation in week 3...eeeeeeek
Posted by Spikeabell at 2:00 PM No comments:

Well, our first half of our Glass studio major is a practical skills based one. Brilliant! The class is a combined 2nd and third year one. We sat with Andrew and Marina to nut out what skills we wanted to be taught..ALL OF THEM! Well we came up with a good selection.

Each Wednesday morning will start with a demonstration, and then we work on our individual projects in a practical mien.
Posted by Spikeabell at 10:25 AM No comments:

I have been sewing over the holidays. A friend is getting married and the invitations say 'elegant'..hmmmmm. She also has a girls night out (other wise known as a hen / doe? party) which has the theme of 'party shoes and bling'..another hmmmm..my wardrobe looks back at me and says.."no, I don't think we do that".

After wading through my extensive fabric collection I found some gold fabric that I have had since I was 21..blingy? maybe? It's almost made up in a tried and tested pattern (though I have found a flaw), it just needs a zip, boning and hem. After class today I remembered that the event is soon upon me, so I went to the local bead shop and bought some sparkle to make a belt. See the crystals nestling in the fabric..the sparkly thing in the middle is the clasp. Usually I don't give that sort of stuff a first glance..but some how it was strangely refreshing to have soooo much choice. 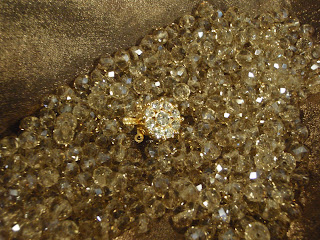 Posted by Spikeabell at 9:47 PM No comments:

This course will be more interesting than I thought, which is a plus. Certain technical issues which involved 3 people, an exchange of computers and then a final projector meltdown, the class proceeded sans images. There was a small discussion, a bit of house keeping and then, when no further technical aid seemed to be forthcoming we were let out early.

The lack of the slide show prompted our tutor Danie Mellor to suggest a discussion in groups about "What is Aboriginal art?" The result showed that a lot (ALL) of the class where unsure and professed confusion of where the boundaries of  where the sacred and art stopped and started. Perhaps in trying to define this, we may gain a better understanding on what we think art IS anyway!

I think that my response baffled my group. Over the last while or so certain preconceptions of mine have lead me to have a fairly open view ...so for me, Aboriginal art is... art produced by an artist who identifies as an Indigenous Australian. Yes I know, that's a really PC and broad if wishy washy response...BUT of course like any Anglo I think of dot paintings and stories of the dream time, but that doesn't encompass everyone, how does that fit in Destiny Deacon? or our tutor Danie? Lots of questions! :) 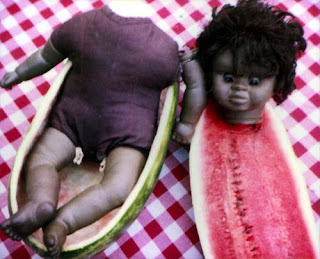 Posted by Spikeabell at 11:00 AM No comments: