So pattern Vogue 8184 got to go to another Australia Day event but in Shot silk (from the stash). I tried the straight skirt option. I added a wide velvet ribbon around the waist that at the back ends in a neat bow (and covers the zip). The necklace is a crochet of freshwater pearls, seed beads, crystals and flame worked beads. The band across the top I cut on the straight (unlike the pattern wHich suggests the bias - for a very good reason because the original pattern is split at the CF so it works that way duh Spike.)

Back to sewing again!

I have finally used my sewing machine for something other than repairs. The very popular Vogue 8184 made up in a light cotton from the Fabric Store (sorry Tessuti!) though it is fully lined with your "lemon voile". I like the band at the top of the bodice but next time I will cut it on the straight grain as the bias has caused it to pull which I rrealy should have though about properly before cutting. The pattern did take some fitting for me but it was worth doing so. My partner was very impressed only having seen his trousers being fixed on my 10 year old industrial straight stitcher. The pink shoes (I NEVER thought I would wear pink shoes) were $10 at Myers.

Posted by Spikeabell at 12:36 PM No comments:

too hot and book cravings

Mm it's too hot to do anything, I'm one of those people to whom the idea of going to the beach on a hot day is torture..I would rather go to work. So i'm sluggishly drifting about trying not to read (as I glutted on 3 books yesterday, though two were YA so not such a pig out, but I did read a book the night before) trying to gather up the energy to tidy up the accruement of stuff floating about on every surface of which only the ceiling has escaped.
Posted by Spikeabell at 5:21 PM No comments:

Why is it that in all the books I am reading all the characters are liberally quaffing great wine?

A picture from Chateuneuf du Pape..one of the wines mentioned of which I have tasted Red and White and wouldn't mind another opportunity. The white I remember being exquisite but that could have been the company I was keeping.. 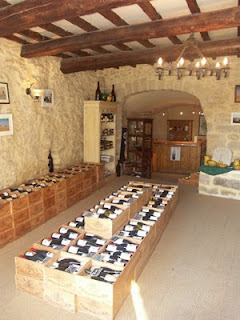 Posted by Spikeabell at 11:27 PM No comments:

Email ThisBlogThis!Share to TwitterShare to FacebookShare to Pinterest
Labels: books

Wishing everyone a happy new year for 2010. I'm looking forward to another year studying and playing with glass.
Posted by Spikeabell at 1:00 AM No comments: